This blog post is about the lineage of teachers that I belong to.

A lot of people have asked me about some history of our Kung Fu and Tai Chi. There was a brief ‘history’ page on my website, but I will go into more detail in this blog post, for those who want more detail.

There are three separate systems in our curriculum, which I learned from my Sifu Deng Jan Gong. These are: Hung Kyun, Hap Kyun and Tai Gik Kyun (Taijiquan). I will explain each of these separately.

I am not a historian, and much of the very early history of kung fu is shrouded in myth. I think these myths are of importance, as they reveal the values and philosophy of the culture. But we should of course, be aware that some of the creation myths of both Shaolin and Tibetan Kung Fu, and Taiji are not historically accurate. I am presenting some of them to paint the picture of the style and culture- not to make any historical or scientific claims. Later history, of course, is more reliable.

This is our ‘Family Tree: 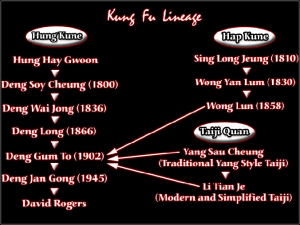 When I first studied with my teacher in Canton in 1991, he did not take formal disciples. Traditionally, the ‘Baai Si’ ceremony is where a student is ‘adopted’ into a Kung Fu family and so can legitimately use the family tree and represent the style. My teacher felt this was an outdated method and ran his school more like a modern academy with regular students. After he retired from running full time schools, however, he wanted to take some ‘closed door’ disciples. This was to preserve the system and ensure the quality of his lineage. Over his lifetime, he had had a great many students join his schools and, of course, the level of the students varied. For that reason,  he decided to formally ‘baai si’ some of his more serious students. I became his disciple at that time, around 2005.This was after I had been his student for almost 15 years.A few years previously, he had travelled to the UK and stayed at my school for several months- training me every day, working with my students and helping me with the ‘Rising Crane’ curriculum. I have continued to go to Canton regularly since to continue learning from him. 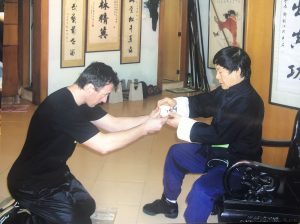 This was the original style in my family.

(For a really good resource for history of the various lineages of Hung Kyun, I recommend my training brother Pavel Macek’s site- it is the most comprehensive information of Hung Kyun in English language on the internet: HERE)

After the burning of the Shaolin temple (18th Century), the Abbot Ji Sin Sim Si fled to Canton and taught at the ‘Hoi Tong’ Monastery. One of his students Hung Hay Kwoon, was considered to be the first generation of the ‘Hung Gar’ (Hung’s Family) school, but the forms he taught were from his teacher and were considered ‘Orthodox Shaolin’.

The original curriculum would have included ‘Gong Ji Fook Fu Kyun’ and ‘Tid Sin Kyun’. In our lineage we have another very old set called ‘Jong Da Kyun’ which still retains the characteristics of the ‘short bridge’. This set is not present in other lineages, unlike the first two.

At this time in Canton, Hung Kyun became the most popular style of martial art.

So- Deng Soy Cheung (Deng Family First Generation) learned from Hong Hay Gwoon, and taught his son, Deng Wai Jong (Second Generation). At this time, the training emphasis was very much about ‘strong stance and iron bridges’ with a lot of ‘lin gong’ (strength training and conditioning exercises) such as heavy weapon forms and ‘iron body’ training.

Deng Long (3rd Generation) was significant- as he was a professional teacher and a famous fighter. He was known as the ”Canton Stick King’ and well known for his stick technique called ’13 spears stick’. By all accounts, he was a pretty severe teacher and had many duels and challenge fights. He was a large man, and very powerful.

Deng Long was a contemporary of ‘Wong Fei Hung’ – who is perhaps the most well known practitioner of  Hung Kyun. This was because Wong Fei Hung had a student (Lam Sai Wing) that published books of the style and so made his teacher’s kung fu very famous.  The three books were ‘Gong Ji Fook Fu Kyun’, ‘Tid Sin Kyun’ and ‘Fu Hok Serng Ying Kyun’. The last set was created by Wong Fei Hung and combines the Hung Kyun style with Hap Kyun (So- ‘Tiger and Crane Double Shape’). His student’s school became known as the Tiger/Crane school due to this beautiful set, which became the most widely practised set of the Southern style in China. Later, many movies were made about him and he became a very popular character in over 100 films and many books. The stories were often fictionalised, but many were based on historical events.

Wong Fei Hung’s father ‘Wong Kei Ying’ was a member of the ’10 Tigers of Canton’. This was a group of kung fu masters who were famous as the best fighters in Southern China. They were led by ‘Wong Yan Lum’ who was the founder of the Hap Kyun style- so the masters would train together and swap techniques etc. at that time, it was common practise to ‘cross train’. Experienced martial artists would exchange knowledge (called: ‘Gau Lau’) – without the formality of teacher/student relationship. This is likely the origin for the long bridge techniques and crane form being assimilated into the Hung Kyun style.

Deng Long and Wong Fei Hung were politically on the same side and would often fight side by side- not from the same lineage, but never the less, martial arts brothers. Remember- at this time martial arts masters formed local militia, and were actively involved in battles against bandits and gangsters. The practise was very much focussed on real combat skills, not just as a ‘keep fit’ method or ‘performance art’. Mass brawls involving weapons were common, and this generation produced some outstanding masters.

Deng Long admired the Hap Kyun style, and thought it would suit his son’s physique. His son, Deng Gum To, was of a much smaller build than his father. An extremely skilled martial artist, but lacking the bodyweight of many of the masters of the powerful ‘Hung Kyun’ style- his father felt that the Hap Kyun style, which emphasised evasiveness and speed, would suit him well.

Deng Long was a training brother of Wong Lun, the last disciple of Wong Yan Lum (The founder of the Hap Kyun Style). The two masters greatly  admired each other’s skills and learned from each other.  Deng Long sent his son ‘Deng Gum To’ (4th Generation) to Wong Lun to learn the Hap Kyun Curriculum.  Wong Lun sent two students to Deng Long to learn his pole techniques  (Man Gam and Jau Hap Sang).

This was how the Hap Kyun style was brought into the Deng Family- Deng Gum To majored in this style.

For more explanation on some of the Deng Family Hung Kyun sets, and video demonstrations, follow this link HERE

Part 2 will focus on the Hap Kyun Hisory, and Part 3 on the Tai Chi history.